In a rural village in Oued Meliz, in the region of Jendouba, there are tomato fields as far as the eye can see. Around a hundred women have been busy since dawn, delicately removing the tomatoes from their plants and will continue working hard until the sun reaches its zenith. At the factory on the other side of the fields, another team has also just started their day. From 7am to 4pm they will sort, wash and cut the tomatoes, before salting and placing them on raised drying racks to dry outside in the Tunisian sun.

Abdelbaki Khamassi, the manager and founder of El Wafa, a company manufacturing and exporting dried tomatoes, closely follows all these operations. He is ready to intervene and prevent anything that could delay the timely export of his products to Bali, or adversely affect the quality of the product so prized by his Italian customers.

Abdelbaki, a farmer and entrepreneur at heart, identified a business opportunity in the valorization of products from his region. The idea consumed his thoughts following his return from Germany in 1998, where he studied international trade. After two previous failed attempts at entrepreneurship in olive oil and yeast, Abdelbaki found a niche with sun-dried tomatoes.

In 2014, he launched the business from scratch and quickly won the trust of an Italian client for the high quality of his products. Since then production has soared. To meet demand, Abdelbaki has forged close ties with farmers in the region, renting their land for the cultivation of this delicious red fruit. Today El Wafa’s operations cover 50 hectares of fields across the four governorates of Jendouba, Siliana, kef and Zaghouan. 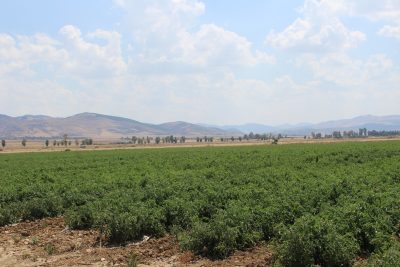 To strengthen his business, Abdelbaki received the support and technical assistance of Mashrou3i, a public-private partnership project between USAID, the Italian Cooperation, HP Foundation and UNIDO.

“With the assistance of the Mashrou3i regional expert, we have requested the allocation of state land to increase our capacity,” Abdelbaki explains. “We’ve also obtained funding for the HACCP procedure which will enable us to comply with international hygiene standards.”

“I have also benefited from an interesting training in environmental hygiene and administrative procedures, which has already helped me overcome many obstacles to achieving my future plans.”

“Thanks also to Mashrou3i, I received a specialized coaching in oral communication techniques. And last April I appeared on Sabra FM to present the company and gain visibility in the Tunisian market,” he says.

Abdelbaki confidently talks about his future projects and goals.

“We just won a new big customer in Belgian who will be satisfied with this year’s harvest. Right now we export a semi-processed product in bulk. But I’m seriously considering adding value to the tomatoes myself with a high-value brand and our own packaging, for the local market and export,” he says. “It’s an achievable goal with the ongoing support of Mashrou3i.”